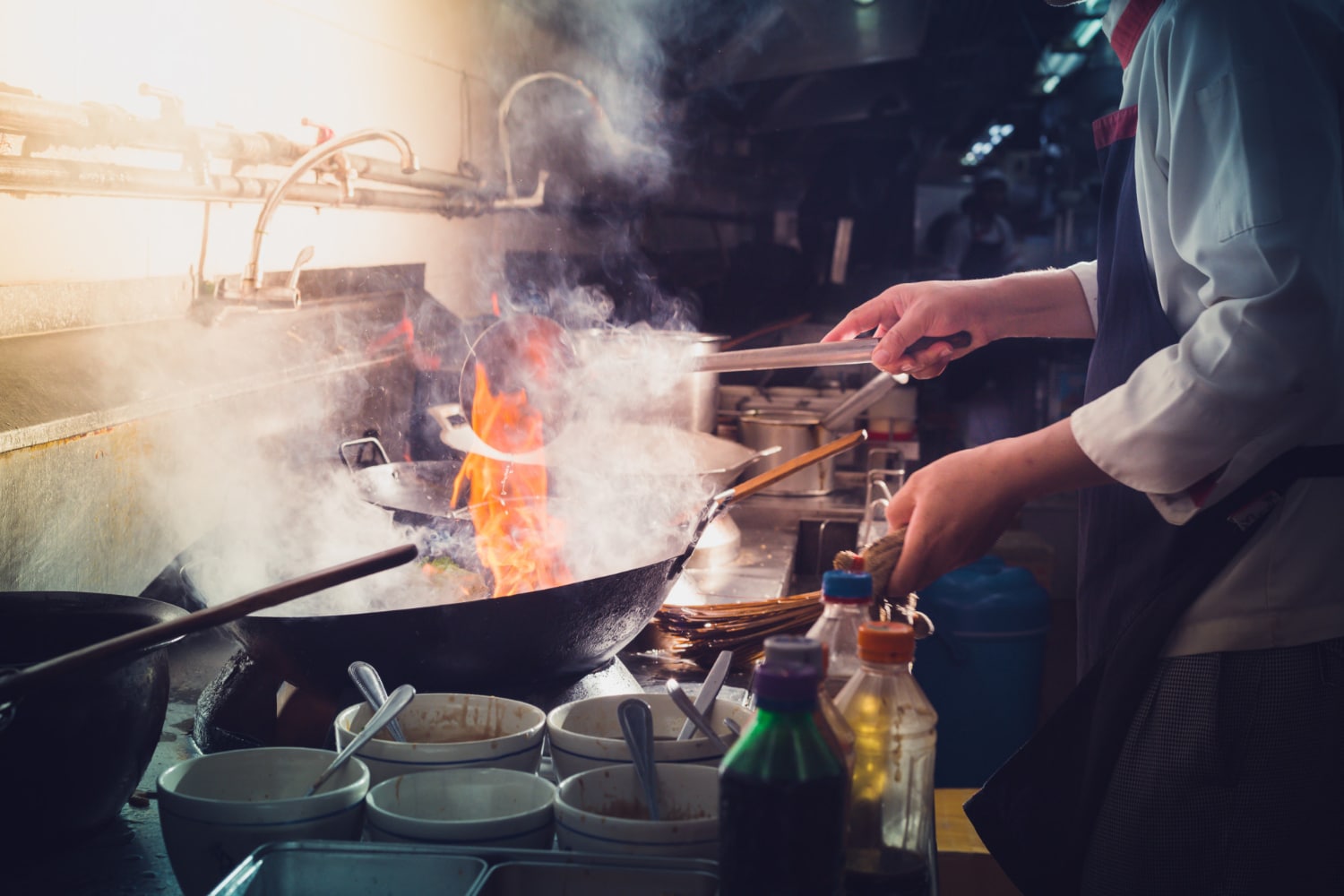 Skillet Vs. Wok: What’s the Difference

Investing in the right cookware is equivalent to improving your culinary skills. In a big way, the cookware that we have in the kitchen influences how we cook and prepare food.

The availability of the right cookware also allows us to cook in a certain way. Suppose you are interested in fanning out to Eastern cuisines and would like to have the advantage of the specific cookware used in places like Taiwan and China. In that case, you might be wondering about the differences between a skillet and a wok.

What’s the Difference Between A Skillet And A Wok?

There is some confusion between frying pans and skillets and woks and skillets. First of all, a skillet is a type of frying pan with a flat bottom. A quality skillet can be used for various cooking tasks, from searing, frying, and especially browning foods.

If you do a lot of searing and frying at home, you may want to invest in high quality and last for many years. The easy choice for many home cooks and chefs in the traditional cast-iron skillet is the de facto choice for chefs when they need to cook steak and other meats.

Skillets offer the advantage of having a high tolerance to high cooking temperatures. They also provide a nice, even sear for different kinds of meats, especially expensive beef portions.

Suppose you love T-bone steaks and the like. In that case, you will love using the traditional skillet, which the English proudly use for every kind of frying task, from preparing a traditional English breakfast to cooking steak to perfection.

A wok is a type of round-bottomed pot that is used for many kinds of Eastern cuisines. It is the main go-to for many authentic Chinese recipes found in Southeast Asia, East Asia, and even South Asia. The wok has also become popular in other parts of the world due to Easter cuisines’ exportation.

Traditionally, the wok is used for more than just sautéing and frying. The original deep, round-bottomed wok can be used for everything from roasting different kinds of nuts to making delicious soups to smoking meats and boiling. Use the wok for expertly searing meat, stewing, braising meats and vegetables, boiling meats and other ingredients, deep-frying and pan-frying.

Of course, who could forget that the wok can be used for stir-frying, which is probably the most popular type of cooking ever to grace Chinese cuisine? As you can see, the traditional wok covers plenty of ground when it comes to cooking, precisely because it is big and it has a depth that the traditional frying pan does not.

If you want to explore wok cooking, you can always buy a spatula (also called a chahn) or a longer spoon, which locals call the hoak. You might be wondering why Chinese cooks use utensils with really long handles.

Can I Use A Skillet Instead of a Wok?

You can certainly use a skillet instead of a wok. Functionally they are the same; only you will be using cookware with plenty of room to spare. If you only have a wok at home and don’t have a skillet, you can probably prepare a nice steak.

Follow the guidelines for cooking the meat properly, so you don’t overcook it. Also, many works are larger and heavier than your average eight-inch frying pan, so set your expectations when using a brand new one for the first time.

As we have mentioned earlier, we highly recommend that you use the proper cooking utensils, so you don’t end up burning your arm in the process should you want to experiment with cooking with high flames. Other than that, you should get the same experience when working with a wok.

Do You Need A Wok?

Let’s say that you have a ton of frying pans at home, including cast iron skillets. Do you need to buy a wok if you want to cook authentic stir-fry dishes? The answer is no; you don’t have to buy a skillet anymore. This is because the Eastern recipes that require a wok can be cooked perfectly well on a regular skillet. Other reasons for sticking it out with your regular frying pans include:

The Top 3 And Best Skillets Without Rivets 2022

The Top 3 And Best Dutch Ovens with Skillet Lid...

Why Are Plates Called Chargers

Can Hydroflasks Go In Dishwasher?

The Best Way to Store Beets

Can You Use CLR on Cutlery