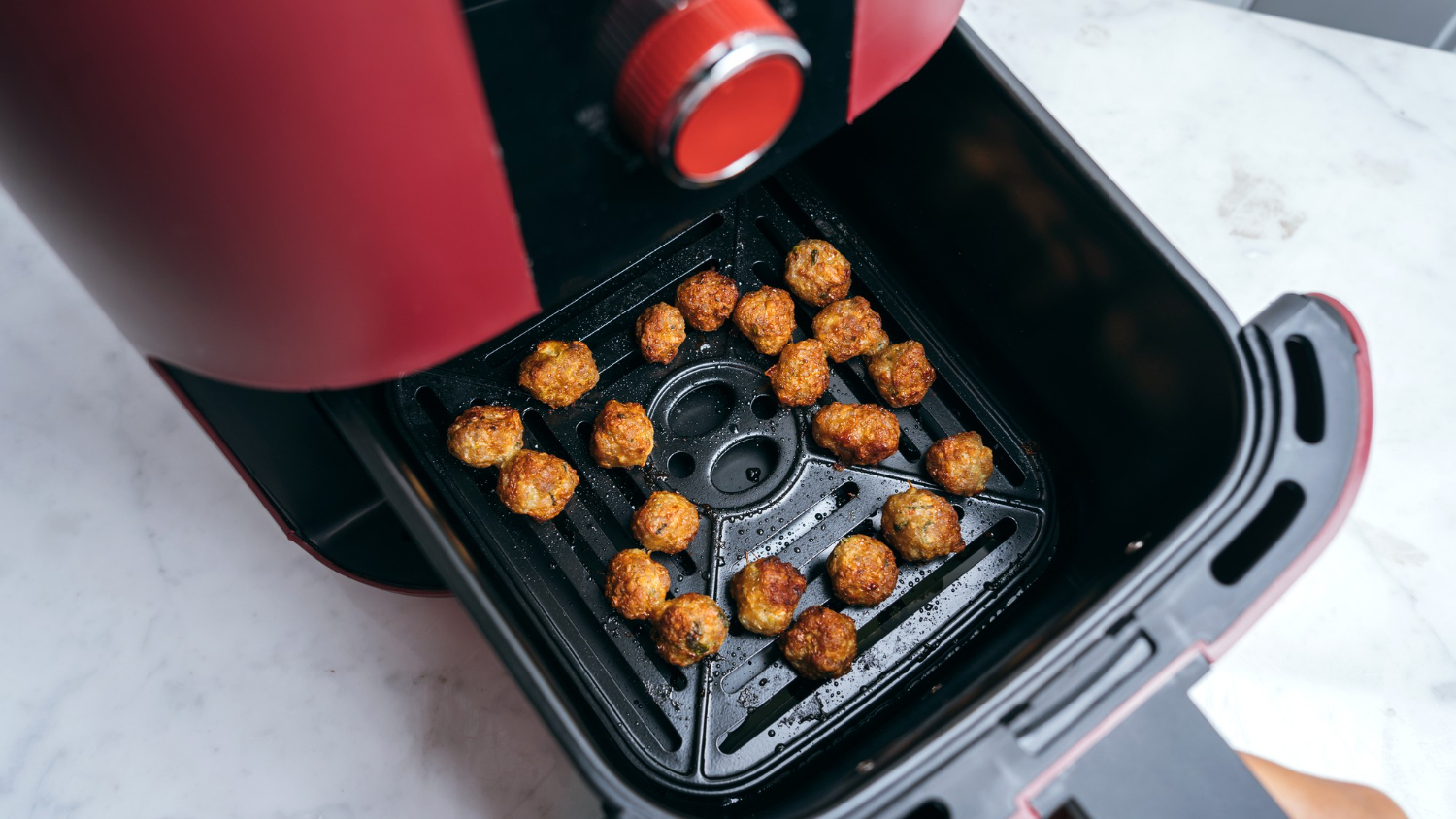 How Healthy is Air Frying?

An air fryer is a square-shaped appliance approximately the size of a coffee maker that sits daintily on any flat surface. We recommend using your kitchen counter because these things can be loud!

First, place the food into the air fryer’s slide-out basket. Then, add your favorite snacks like chicken nuggets, chopped potatoes, and zucchini slices. You can even toss the food in a light oil coating if you wish.

A fan pumps up to 400°F of warm air around the food. It’s like a convection oven a little. The flowing air mainly cooks the exterior of food, creating a crispy, brown cover and keeping the interior soft, just like deep-fried food. When the meal is cooked, a container under the basket catches any dropping grate.

Air frying is a healthier pick compared to constantly frying with oil. In addition, air fryers can reduce that unwanted fat and calories by 70% to 80%.

However, some things about cooking with an air fryer may not be as healthy as we thought they were.

For example, several studies show that air frying can boost “cholesterol oxidation products” (COPs). These compounds are connected to the development of coronary heart disease, dangerous hardening of arteries, the development of cancer, and other always-fatal medical conditions.

Air fryers can make healthier foods than deep-fried foods, but keep in mind that fried foods are still fried. When cooking excessively with oil, health repercussions are always related.

Cooking at higher temperatures may create chemical reactions in certain stuffed foods that develop acrylamide. French fries, potato chips, grain meals, and coffee have greater acrylamide levels. Acrylamide increases the probability of some ailments since it can build up in the body.

Acrylamide can spontaneously develop via chemical reactions in certain types of starchy food after cooking at high temperatures. Some foods with more acrylamide include potato chips, grain meals (e.g., breakfast cereals, toasts, and cookies), and coffee.

Acrylamide is a molecule that can be formed in certain foods during cooking operations at high temperatures, such as frying, roasting, and baking. Acrylamide in food forms is made from sugars and an amino acid naturally present in foodstuffs; it does not come from food or environmental packing.

One study published in the Journal of Food Science indicated that air-frying potatoes reduced acrylamide manifestation by as much as 90%. Regardless of any pretreatments applied to the potatoes, air frying showed better results than what people normally do, such as deep-frying.

What Does Acrylamide do to Our Body?

Studies have demonstrated that carbohydrates and amino acids are the critical chemical substances responsible for acrylamide production in foods. Additionally, new sales by Spain’s academics show for the first time that dietary lipids contribute significantly to acrylamide production.

Researchers have observed that large amounts of fat can account for up to half of the acrylamide found in this food in roasted almonds and are likely to account for high levels found in other fatty foods. While scientists have not yet shown that reducing the fat content in foods reduces acrylamide, the study is a new objective to facilitate the development of acrylamide.

Acrylamide was recently demonstrated naturally in an expanding range of foods ranging from French fries and coffee beans. In addition, it is a synthetic chemical commonly utilized as a water treatment agent for the production of adhesives, dyes, and fabric.

Some studies have connected high acrylamide levels to animal cancer and human neurological impairment. Thus, despite doubts about the current health consequences of acrylamide present in food, the public had become more aware of it. However, it may take some time before people started acting more consistently on this new scientific information.

High-temperature cooking, which includes deep-frying, roasting, and sometimes even baking, will most probably lead to high levels of acrylamide in food. Boiling and steaming usually do not create acrylamide. Acrylamide is generally present in plant-based foods, such as potato goods, grain, or coffee products. Acrylamide does not form or form in dairy, meat, and fish items in lower quantities. Acrylamide is often more likely to build during cooking at longer or higher temperatures.

Why Are Air Fryers Healthier?

Air frying is mostly healthier than oil frying. It reduces calories by up to 80% and has much less fat. However, some air-fried food may cause more harm than help. Air frying of fish boosted COPs, which increases during the cooking process. These compounds are connected to coronary heart disease, artery stiffening, cancer, and other disorders.

It is not yet apparent whether acrylamide levels in foods increase the risk of cancer. However, if you are interested, you can do some things to decrease your exposure. For example, acrylamide levels are generally increased while cooking for longer times or at greater temperatures and when particular cooking procedures are utilized (such as frying or roasting).

According to the FDA, there are several strategies to decrease exposure to acrylamide in food:

The Best Time to Eat Avocado for Weight Gain

How Much Avocado Oil Can You Eat Per Day

Can Air Purifiers Protect You from COVID-19?