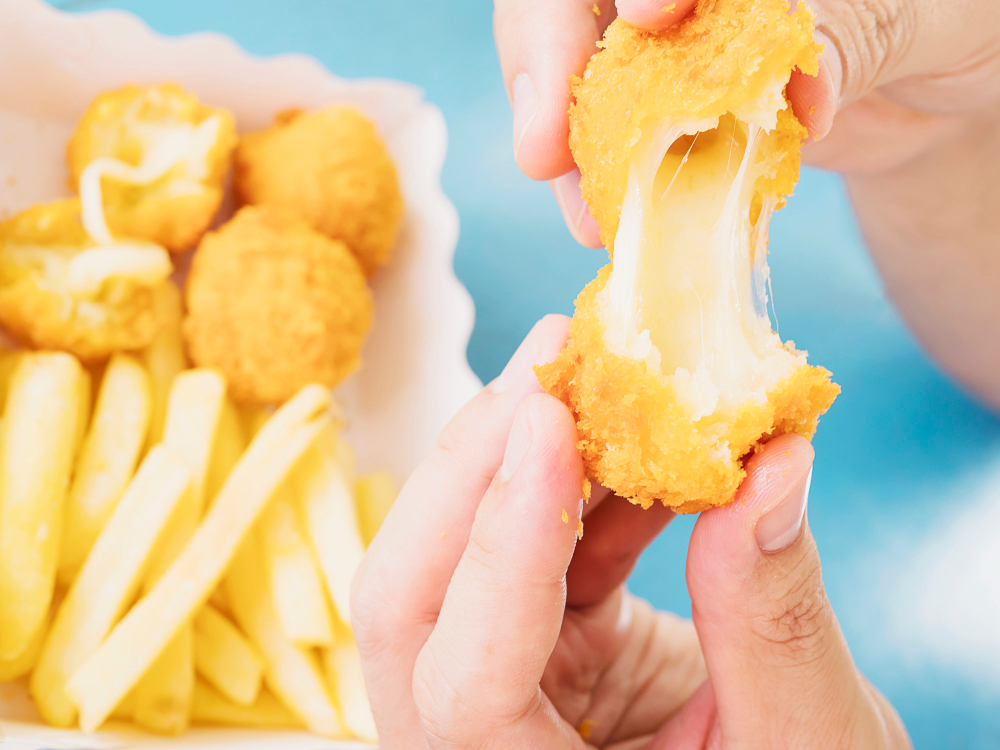 It’s all about that cheese for poutine and cheese fries. While poutine’s cheese curds melt and soften but remain whole, the disco fries’ cheese curds are entirely melted and give a lot of texture to the dish.

Because you like potato and some like potahto, poutine, and loaded fries are not interchangeable terms. French fries smothered in cheese curds and thick gravy is known as poutine in the Canadian country. Americans take the notion further by including regional and local variations to attract a disparate range of demographics and interests.

Some people may have heard about disco fries for those who enjoy poutine. Disco fries are an American invention that “kind of” resembles poutine, a despicable effort by Americans to claim that they originated poutine. On the other hand, poutine has been around for almost two decades, long before disco fries were even thought of.

At least in the form familiar to Montrealers, Poutine is a Quebec original. According to legend, poutine was first served to residents of rural Quebec in the late 1950s. As a fast-food staple in the United States, poutine is served at McDonald’s and several other establishments.

On the other hand, Disco fries have their origins in the Garden State. Disco fries, which were popular in New Jersey and New York in the 1970s, were a popular late-night snack in diners after the discos closed. Disco fries, like poutine, were previously considered a boozy snack for individuals who had partied the night away in the style of Saturday Night Fever.

Are Loaded Fries the Same as Poutine?

In contrast to the vagueness of cheese fries, poutine has a distinct and well-defined purpose. Poutine is nothing but melted cheese curds and gravy. Period.

Gravy-covered fries with strategically melted cheese curds—this is what makes poutine. Adding cheese curds to a plate of french fries is an art form. In addition to adding a pleasing texture to the dish, the dense cheese curds also help to keep the fries from becoming soggy with sauce. On the other hand, poutine would be a wet mess if made with shredded cheese.

A variety of “loaded cheese fries” are available. Shoestring fries with a side of American cheese, mozzarella fries, or spuds smothered in cheese are all great options for this dish. Of course, a pizza restaurant would be fitting to serve you whatever combination of fried potato and cheese they could concoct if you ordered loaded fries.

Few culinary origin stories can be traced down to a single individual, making it difficult to pinpoint the origin of a cuisine. For example, in rural Quebec in the 1950s, poutine was born. Many restaurants claim to be the source of the delicacy, but none have the proof necessary to safeguard their place in the history books.

Most often, beef broth is used to make the gravy that coats poutine. Although some individuals use a beef and chicken broth mixture, others prefer to use only beef broth. It’s possible to season the broth separately from the fries, or the seasoning will naturally improve its flavor.

What Is Poutine Called in America?

Disco fries are an American invention that “kind of” resembles poutine, a despicable attempt by Americans to boast that they originated poutine. On the other hand, poutine has been around for almost two decades, long before disco fries were even thought of.

There are many variations on a typical routine, but it’s made up of french fries in gravy with cheese curds as an accompaniment. French fries, beef gravy sauce, and mozzarella cheese make up the base of disco fries. There are a few minor changes between the two dishes, despite being made of fried potatoes, gravy, and cheese.

Disco fries are made with large steak-cut fries. It is common for poutine to be made using French fries. In contrast to poutine, Disco fries use a much more decadent, darker sauce on their fries. Ultimately, poutine would be nothing without its cheese curds in Quebec. They’re a French-Canadian culinary delicacy.

Instead of cheese curds, mozzarella or provolone or American cheese is grated and melted on top of the dish in the case of disco fries. That is not poutine, and I apologize.

If you ever find yourself in the Garden State, don’t miss out on a plate of disco fries! And if an American ever claims credit for the invention of poutine on them, you can point out that they are entirely wrong.

Is Poutine the Same as Cheesy Chips and Gravy? 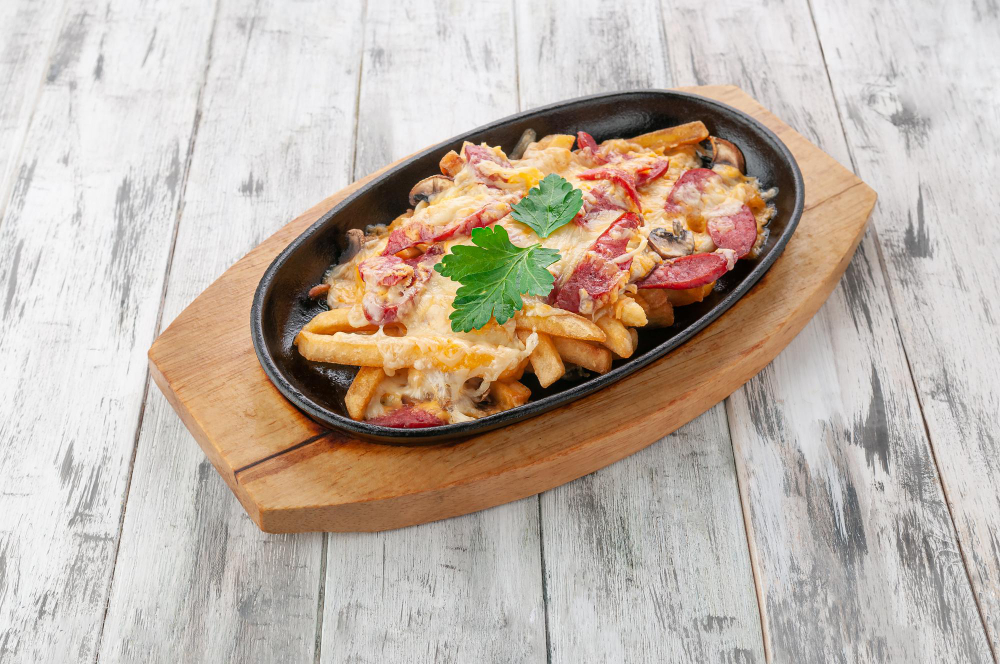 There are several variations on typical poutine, but it’s made up of french fries in gravy with cheese curds on top. When it comes to disco fries, french fries, sauce, and mozzarella cheese are combined to create this delicious snack food.

A diner regular in rural Quebec is said to have ordered the cook to put cheese curds on top of his chips in 1957, when poutine is said to have come into being. However, the dish had not yet been completed even though the gravy was added to keep the chips heated for a more extended period.

Squeaky cheese curds on top of crispy chips and gravy were the last touches on this bizarre meal. It’s cozy, delicious, and moreish because of the variety of textures.

Large steak-cut fries are used to make disco fries. French fries are used in the preparation of poutine. Unlike poutine, disco fries employ a considerably more decadent, darker sauce for their fries. In the end, Quebec poutine is nothing without its cheese curds. They’re a specialty of French-Canadian cuisine.

Instead of cheese curds, mozzarella or provolone or American cheese is grated and melted on top of the dish in the case of disco fries. That is not poutine, and I apologize.

If you ever find yourself in the Garden State, don’t miss out on a plate of disco fries! And if an American ever claims credit for the invention of poutine on them, you can point out that they are entirely wrong.

Does Canada Have Cheese Fries?

Originally from Quebec, poutine is a dish of fresh-cut fries topped with cheese curds and gravy, famous throughout the country. Since then, this potato dish has spread across Canada and the rest of the world, making it a household name.

From high-end dining establishments to fast food outlets, such as McDonald’s and Burger King, have poutine on their menus. There is no clearer sense to characterize the food and culture of Quebec than with this dish.

In 1969, the Ashton Snack Bar food truck on Boulevard Hamel in Quebec City brought the meal, which had become popular in tiny villages in southern Quebec, and in 1983, Montreal got it. As a result, poutine, a beloved Quebec and Ontario street food, has made its way onto several chip truck menus.

In the course of poutine’s rise in popularity, several variants emerged, including Italian poutine (prepared with spaghetti-sausage sauce in place of gravy) and veggie poutine (made with mushroom sauce and veggies), and Irish poutine (made with lardons). Some examples include Gaspésie’s La Galvanise (chicken-and-green-pea galvalume) and Montreal’s Poutine (smoked beef poutine).

Smoke’s Poutinerie and Poutini’s House of Poutine were two of the first specialty poutine chains and restaurants in Canadian cities (2009). Poutine has expanded to numerous nations, including the United Kingdom, Korea, and potato-heavy Russia, where it is known as Raspoutine.

Which Rice Has the Least Carbs

Why Are Dragon Fruit Tasteless