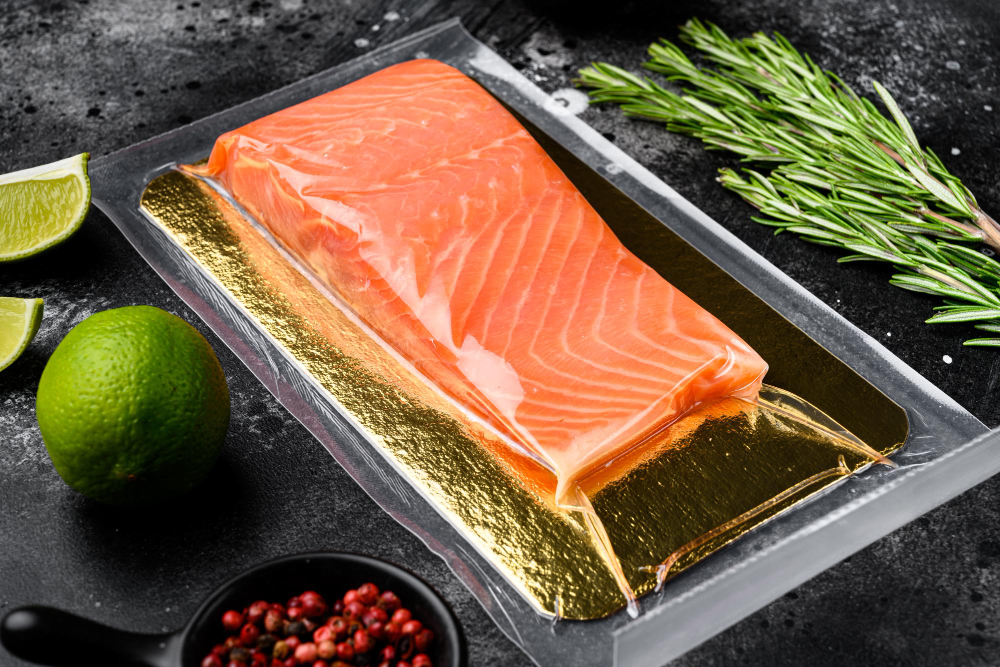 Refrigerated or exhibited on a big bed of fresh ice is the only way to go when shopping for fish. However, some elements might alter the color and freshness of fish; these include the fish’s nutrition and surroundings, treatment with color fixatives like carbon monoxide, and other packing processes.

There may be time or temperature indicators on the packaging of some refrigerated seafood, indicating whether the product has been kept at the correct temperature. Only buy seafood if the hand suggests that the product is safe to consume, and always check the indicators.

Red gills and no foul odor should be present on all fish parts. Tuna caught recently should have firm flesh and bright red bloodlines in the fillets. When a person presses on the flesh, it should spring back.

It’s critical to keep bacteria from raw fish from contaminating the finished product while processing fresh or thawed seafood. Dishwasher-safe equipment, cutting boards, and countertops should be washed with soap and hot water after working with raw items like shellfish.

Can You Eat Raw Packaged Salmon?

Yes, previously frozen salmon from high-quality supermarket stores can be eaten raw. However, no legal definition exists for “sushi grade,” or when a fish is good to be consumed raw.

But there are some checking and preparing you need to do if you want to consume raw salmon as part of your daily diet. Salmonella may not kill you, but it’s still a pain in the ass.

Therefore, it’s all up to the grocery shop for raw food. For this reason, it is desirable to buy pre-frozen salmon, as it is more likely to contain killed parasites.

Like fish and seafood, lean proteins can be an important part of a balanced diet. In addition, children’s growth and heart health benefit from a fish-and-seafood-rich diet, according to research.

Seafood meals like sushi and sashimi feature raw salmon as a common element, especially sushi. For a hearty raw salmon with salt and sugar and dill appetizer, try gravlax if you ever find yourself in Scandinavia.

Are these dangers sufficient to warrant caution? No. There is a slight risk associated with eating raw animal proteins. In contrast, illnesses like trichinosis, which can be deadly, can be contracted from eating raw pork. Salmon, on the other hand, is different.

How Long Does Vacuum Sealed Fresh Salmon Last in the Fridge?

Salmon seasoned with salt can be stored for a longer time, and this specific method will also enhance its flavor. The shelf life of raw salmon purchased from your local grocer is often only two days.

The freshness and quality of the salmon you have will determine the response to this question; thus, there isn’t a single solution. A lengthy seafood supply chain causes the salmon to be sent to other countries for processing before it reaches the supermarket shelf.

Due to their innovative supply chain, some manufacturers can process and freeze our salmon the same day it is caught, ensuring the highest possible quality of salmon throughout the whole process. Therefore, you should expect your salmon to survive around four to five days in the fridge if you store and handle it properly.

Thaw frozen fish slowly in the refrigerator overnight before cooking. Seafood that needs to be thawed fast can either be sealed in a plastic bag and put in the fridge for two or more hours or microwaved on “defrost” mode for a few minutes until it’s no longer frozen but still malleable enough to handle.

Can You Eat Raw Salmon Safely?

Salmon is considered a highly-consumed raw fish. However, salmon has long been regarded as a superfood because of its numerous health advantages. Rich and tasty, it can be served in various ways.

Slowly lower the packed salmon into the water bowl, the closed-end first, while the seal is still open. The air will be pushed out of the bag if the creases are kept minimum. Seal the pack when lowered to just below the water’s surface.

It may take up to around a month for the seafood to arrive at your local supermarket from the fisherman. However, it will be delivered fresh and flash-frozen to your house by Alaskan Salmon, unlike the typical grocery store.

To keep your cooked salmon in the freezer, if you don’t plan to eat within three or four days, it’s safe to keep it in the fridge; you must make sure that it hasn’t been left unrefrigerated for more than that an hour after cooking.

Cooked salmon that’s been in the fridge for further than three or four days should be thrown away, according to a good rule of thumb. If the salmon begins to smell “off” or seems slimy, throw it away.

What Happens If You Eat Salmon a Little Raw?

Salmon can be eaten raw by many people. However, parasites may be present in raw salmon that has not been frozen. It’s possible that freezing won’t eliminate any bacteria that are there. To kill bacteria and parasites, cook salmon to an internal temperature of 145 degrees Fahrenheit.

As a result of inappropriate handling or harvesting from water contaminated with human waste, most seafood-related illnesses are caused by contamination. Additionally, pollutants from the environment might be found in raw salmon. There may be trace quantities of persistent organic contaminants and heavy metals in farmed and wild salmon.

Parasites, bacteria, and other diseases may be present in raw salmon. The fish’s natural environment can cause some of these, while inappropriate handling can cause others. A temperature of 145ºF (63ºC) destroys bacteria and parasites, yet eating raw salmon puts you in danger of acquiring an illness.

It’s up to the supermarkets whether they want to put that label on anything. Many retailers do not place these labels on their products because they do not want to be held liable if someone eats any and becomes ill. However, it doesn’t mean that they don’t have any raw fish.

But most fresh or frozen salmon is inappropriate for human consumption in any form. Salmon is prone to bacteria and parasites, which is why it should be avoided. If the parasites are killed by deep freezing, any bacteria present will not be affected.

Why Can’t You Vacuum Seal Garlic

What Is Baking Spread: Is The Same as Butter?