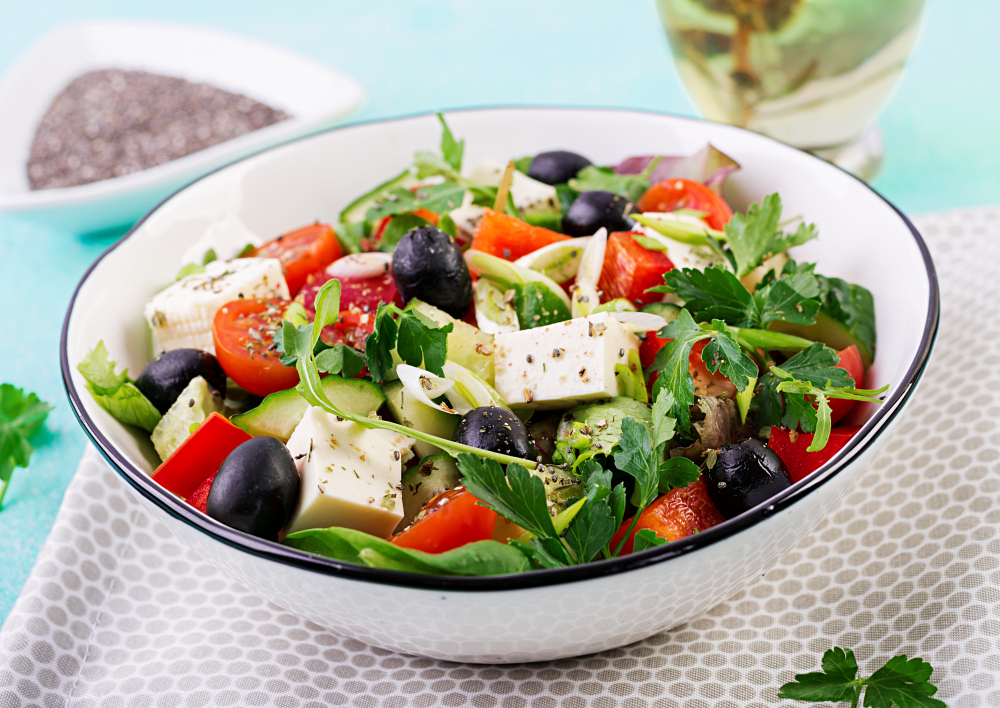 Ancient Greek and Roman cuisine were rich in raw vegetable dishes served with vinegar, olive oil, and herbs, even though they didn’t use the term “salad.” There are many examples in Natural History of how salads (acetaria) could be made without using a fire to cook them, saving energy costs. They were easy to eat and not designed to overwhelm the senses or stoke the desire for food.

Hippocrates and Galen, two ancient medical practitioners, believed that raw vegetables could easily pass through the digestive system and thus should be served first. However, several people claimed that vinegar in the dressing ruined the flavor of the wine, so it is best to do the sauce last. Since then, this debate has raged on.

The word salade is derived from the Latin herba salata, which means “salted herb” in Vulgar Latin. It was a common ingredient in the Byzantine era, and it reappeared in European cuisine through Spain and Italy. The term “salad” was first used to refer to various pickled greens. Later, the term salade was used to describe fresh-cooked greens or raw vegetables prepared in the Roman style.

In the late fourteenth century, leafy vegetables served as an accompaniment to meats or poultry were standard for a salade or salet. Cooking instructions for a dish in the Forme of Cury (c. 1390) include the use of herbs such as rosemary and parsley. In addition to flowers, other salad recipes included fruits like oranges and lemons, which served at the very least as a garnish.

Why Do I Poop Right After Eating Salad?

Individuals’ bowel movements are as unique as their personalities. So when it comes to the number of times one should go to the bathroom each day, there’s no hard and fast rule. The bowel movement frequency varies, but most people poop once or twice a day.

Your bowel movements can change for various reasons, including changes in your diet and physical activity. Therefore, if you notice an increase in your bowel movements daily, it is not necessarily a sign of something more serious.

Having regular bowel movements indicates that your digestive system is working correctly.

There may be an increase in bowel movements if you’ve recently changed your eating habits and started eating more veggies and fruits, and let’s not forget whole grains. Because these foods are rich in dietary fiber, this is the reason. A diet high in fiber is necessary to maintain healthy blood sugar levels and ward off heart disease. Colon health is improved, too.

Additionally, a high-fiber diet aids in the prevention of constipation by increasing the size of your stool and softening it. However, because water is absorbed by fiber and flushes waste from your body, a higher water intake can also lead to excessive bowel movements.

Is Eating Salads Make You Poop?

Kale contains 45 different flavonoids that have been shown to have anti-inflammatory and antioxidant properties. However, raw kale is also a great source of insoluble fiber. A high-fiber diet can help some people digest their food more efficiently, but it can also cause them to poop for sensitive ones. To ensure that you don’t miss out on the significant health benefits of kale, order a salad that incorporates it with other greens.

Many vinaigrette dressings contain vinegar, which is acidic and can cause heartburn in some people. Even if you avoid heartburn-inducing foods like tomatoes, citrus, and onions, you may still experience acid reflux if you overdo it on the dressing.

To begin a meal with lettuce does not guarantee that it will always be considered “light.” Add-ons like steak and a heavy dressing can increase stomach pressure and contribute to acid reflux symptoms if you eat a large salad. To make matters worse, full-fat dairy-based dressings can cause heartburn symptoms if you’re using them.

Remember these the next time you decide to order a salad for lunch, but if heartburn symptoms still arise, make sure to have a bottle of antacids on hand to deal with the situation.

Why Does Salad Give Me Diarrhea?

Fiber is capable of amazing things. These ingredients and sweet potatoes and oats contain soluble fiber, so they’re great additions to salads.

This type of fiber aids in water absorption, resulting in a more substantial stool. In addition to soluble fiber, there is also insoluble fiber, which aids in the movement of waste through the digestive tract, thus alleviating constipation.

A good source of insoluble fiber is found in the skins of fruits and vegetables and the seeds and skins of legumes like beans and peas. If you’ve ever had a bowel movement after eating a salad, you’ll know that these foods are even more prevalent in salads.

Fruits and vegetables, especially lettuce, contain a lot of water. Drinking water aids in digestion, which is well-known. Fiber works best when it wicks away moisture. As a result, your stool will be soft and heavy to the touch.

Why Does Salad Mess My Stomach Up?

Salad greens, such as lettuce, are generally safe to eat for most people. In addition, because lettuce is so low in calories, overeating is less likely to occur.

In recent years, E. coli contamination in lettuce crops has been on the rise. As a result, Romaine lettuce is frequently recalled for health and safety reasons. In addition, there is a strong possibility that contaminated drainage from neighboring livestock farms is to blame for these outbreaks.

You should wash your lettuce thoroughly before eating it because pesticides may be used in some fields. In addition, certain people may experience an allergic reaction if they eat lettuce. Because of this, it is recommended that you see a doctor to find out if the food is causing an allergic reaction.

How Long Do Salad Take To Digest

Can Salmon Be Frozen?

5 Healthy Alternatives to Bread That Can Help You to...