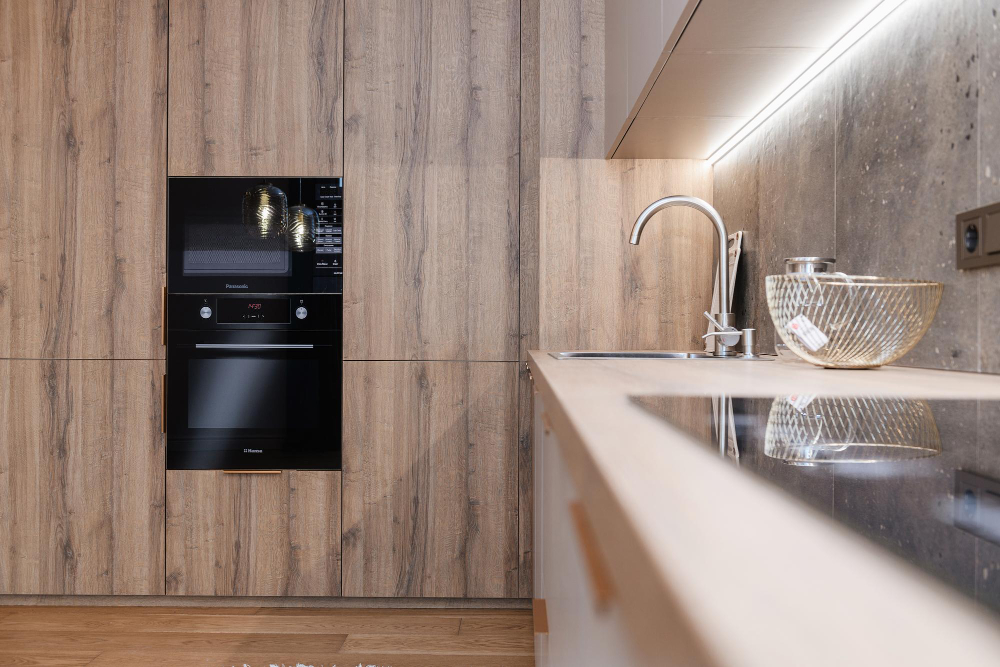 Built-in ovens are ovens that are easily integrated into your kitchen. Your oven will be able to fit into whatever space you want, and it will be surrounded by the same wood detailing that your cupboards have. So, if you want a sleek, modern kitchen but still want to cook quickly, a built-in oven is a way to go. Installing a built-in oven in your kitchen is like installing a range cooker (at least the oven portion) into your wall. Built-in ovens are available in a variety of sizes. These usually refer to the unit’s breadth. They’re 55-65cm wide or 85-95cm wide. The standard widths of built-in ovens are 60cm and 90cm. Of course, a wider oven will have a larger capacity, so consider your oven size requirements and whether you would benefit from a more comprehensive, larger oven before purchasing.

What Is a Built-Under Oven?

Because a built-under oven is integrated into the fabric of your kitchen, you may get a truly modern look with it, just as you can with a built-in oven. On the other hand, a built-under oven can provide the same user experience as a freestanding oven if you’re acclimated to it.

Of course, when compared to standalone ovens, built-under ovens have a few drawbacks. One disadvantage is that it does not come with a

hob. As a result, unlike a freestanding cooker, you must select a hob to match it. However, because you can choose whatever hob you select, this may not be terrible. So, for example, you may go with a low-cost electric oven and a separate high-end induction cooktop.

Unlike built-in ovens, a built-under can have its hob placed on it. As a result, you can have a freestanding oven’s classic look while having exceptional style. But, of course, because the hob isn’t connected to the stove, you can place it on an island apart from the oven or somewhere else.

Built-in ovens are highly adaptable. They can make your kitchen feel precise as you want it to feel without sacrificing its functionality. They may be a great oven in the proper kitchen, providing you with everything you need to make your new kitchen the heart of the home you’ve always wanted it to be.

Can You Put a Built-In Oven on The Floor?

When installing a built-in oven, choosing the correct location is critical. Usability, durability, and overall efficiency must all be considered. As a result, you’ll want to place your built-in oven in a secure site – specialty casing will serve you well in the long run.

Are Built-Under Ovens a Standard Size?

Standard casings for built-under ovens should work on most brands. A built-under container measures 60 cm x 72 cm. This is called the “housing unit” for the built under oven.

Oven capacity is often expressed in liters rather than width. So, if you think you’ll need a more extensive range for your home, double-check that you’ve identified and taken into account the correct capacity. A single built-in oven will hold between 60 and 110 liters of food. You can only cook at one temperature, which will be plenty to feed a family and entertain guests at dinner parties.

The capacity of a twin built-in oven will be increased. If capacity is 90 to 130 liters, you should anticipate that much for the space required during installation. If you choose a built-in double oven, this will be reduced to between 70 and 100 liters. A dual oven is more suited to your demands if you have a large family and need to cook two dishes simultaneously or if you enjoy holding parties or get-togethers at home.

Are Built-in Ovens Better Than Built-Under?

Installing built-in ovens, also known as wall ovens, is an excellent method to get a fully streamlined appearance. However, when it comes to integrated appliances, it’s crucial to conduct your research before purchasing.

Vacuum Seal Vs. Ziploc: Is Vacuum Sealing Better Than Ziploc?

5 Best Over The Sink Shelves for Your Home

The Best Way to Store Peaches: How to Keep Them...