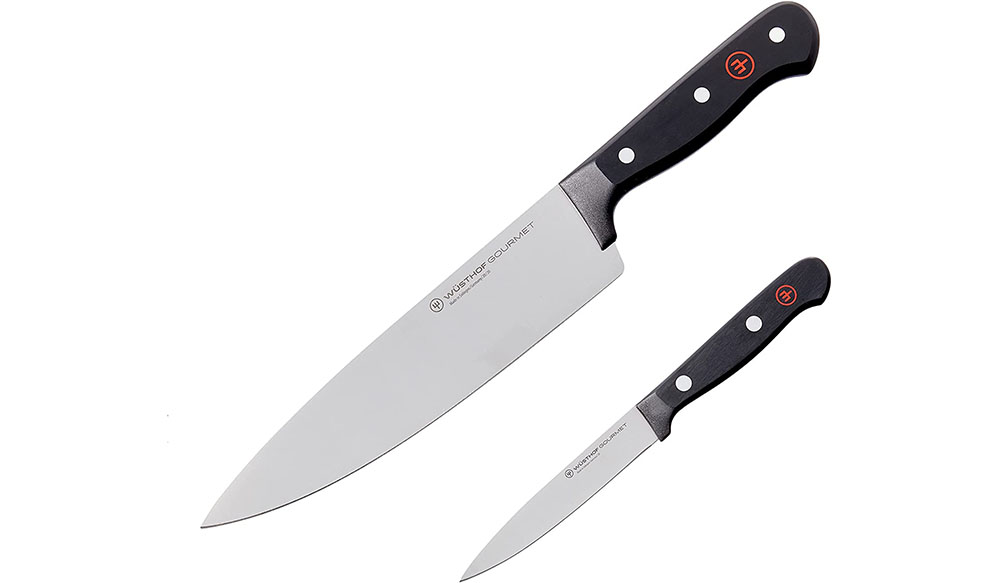 Which Knife Does James Martin Use

As an advocate for British cuisine, James Martin is committed to using the most incredible ingredients available and developing simple, delicious recipes accessible to everyone. In November 1996, he made his television debut and hadn’t been off the air since. Before hosting BBC1’s Saturday Kitchen, where Martin attracted an audience of more than 3 million viewers for almost a decade, James Martin appeared regularly on Ready Steady Cook (BBC2). Additionally, he is the author of 18 bestsellers and award-winning cookbooks.

When James was younger, he worked in the catering department at Castle Howard with his father. At Scarborough Technical College, he was named Student of the Year three times in a row. After working in the kitchen with Luke Matthews at Chewton Glen, he opened the Hotel and Bistro du Vin in Winchester as Chef.

James Martin Manchester started in September 2013 and specialized in modern British cuisine. This bakery and cafe are available at Stansted, Glasgow, and into Lakeside shopping malls and Manchester Piccadilly train station.

The Stellar James Martin IJ17 Cooks Knife has a functional design despite its relatively low price. The soft-grip handle is easy to grip and adapt to the user’s palm. Cut through your food with ease, thanks to its solid blade and heel guard, providing additional safety if your hands slide.

Each knife includes an anti-slip compound handle invented by James Martin, ensuring a safe and secure grip. In addition, the blades are made of molybdenum steel, which is exceptionally sharp and well-balanced. While James Martin knives are sold as dishwasher-safe, handwashing them to prevent rusting, and dishwasher stains are recommended.

If you don’t have enough budget to purchase this fantastic knife used by James Martin, here are some of the other similar recommendations from our list: James Martin Santoku Knife, Wusthof Gourmet Cook’s Set, and ZWILLING Twin Signature Kitchen Knife Set.

The santoku knife, a form of chef’s knife with roots in Japan, has been hot on its heels in recent years, although many models are now created in other countries.

With its piercingly sharp tip, straight spine, and curved cutting edge, the conventional chef’s knife is one of the most familiar tools in the kitchen. The design of this cutting tool allows you to use it for a wide range of tasks, from cutting meat to slicing herbs in the classic rocking motion.

The narrower grip of the James Martin Santoku Knife allows it to be used by those with smaller hands. Small cutting jobs, such as chopping garlic or slicing fruit, are best done with the short blade because there isn’t a lot of blade edge to use. It is, nevertheless, an incredibly sharp knife with even, scalloped kullen that makes it easy to remove food from the knife’s blade.

Although the handle may be longer than the blade, this does not impair the knife’s usability in any way. The handle’s non-slip substance makes it quite simple to hold onto, and it’s strong, so it’s easy to hold on to anything. When using it for the first time, use caution because the blade is razor-sharp and will cut through anything it touches.

This product is included in the roster of the James Martin Knife Collection. This cutting tool is marketed as dishwasher-safe, with a Stellar Lifetime Guarantee included on each purchased knife.

All Wüsthof knives are manufactured in Solingen, where about 400 of the company’s 480 employees are employed. Trident in circle is Wüsthof’s trademark. Over 80 nations sell the brand’s products. In addition, Wüsthof runs two local distribution subsidiaries in North America, traditionally the largest market for the company’s products.

Rather than being forged, the blades in Wüsthof 1125060206 Gourmet Cook’s Set are laser-cut stamped steel. However, they are made of high-carbon steel that is resistant to corrosion and rust. They also have a sturdy feel and a high-quality appearance.

Compared to Japanese-style blades, German-style knives are honed at an angle of 14 degrees per side. Precision Edge Technology from Wüsthof ensures consistent results when it comes to automated blade sharpening. Each blade’s laser measurements are used to determine the ideal tilt angle for the automated sharpening procedure.

They are stamped rather than developed to make these knives feel lighter than their forged counterparts. But they aren’t so light that you’ll feel out of balance with them. Despite their lightweight, they nonetheless have a decent amount of substance.

The synthetic handle material has been molded to ensure a safe and secure grip. For increased durability, it incorporates quadruple riveting. As a result, the full-tang design provides greater control over the blade.

Overall, these knives are a joy to use for anyone who enjoys food preparation. It is worth the money because they have a high-quality knife score. In addition to being multi-functional and easy to use, the knives are also sharp out of the box. You’ll be hard-pressed to find a comparable product at this pricing point.

ZWILLING Twin Signature Kitchen Knife Set is for people who prefer a little more control when cooking. Officially, the blade is 18 centimeters, but we found it to be 19 centimeters long. This is due to the knife bolster’s tilted top and shorter cutting edge, which is the transition segment between the handle and blade of the knife.

Professional or amateur, this two-knife set is well worth the money you spend. This set of professional chef knives is made of high-quality stainless steel, and it is available in a variety of proper sizes. They’re sharp out of the box, and they’ll maintain that edge for a long time to come. The quality of these knives is excellent, and they’ll last longer than your last set of kitchen utensils.

It’s easier to manage the knife when your thumb and index finger rest on the blade itself because of this natural tendency toward a pinch grip. Larger hands will like the handle’s 13-centimeter length.

Because of the thinness of the blade’s blunt end, it was easy to see your cutting process without it feeling flimsy. In addition, scalloped kullen assisted in releasing food from the blade. However, it’s relatively low on the edge compared to other knives.

These knives are well-balanced. Thanks to their enormous size and weight, meal prepping will be a breeze with these heavyweights. Of course, you won’t be exhausted by the weight of the knives, but they aren’t as heavy as you may think. In addition, the blades are dishwasher safe; however, we recommend handwashing them to preserve their quality and ensure they serve you for a more extended time.

The main picture is from Amazon – Wüsthof Store. As an Amazon Associate I earn from qualifying purchases.

15 Small Kitchen Tips That Conquer 3 of the Most...