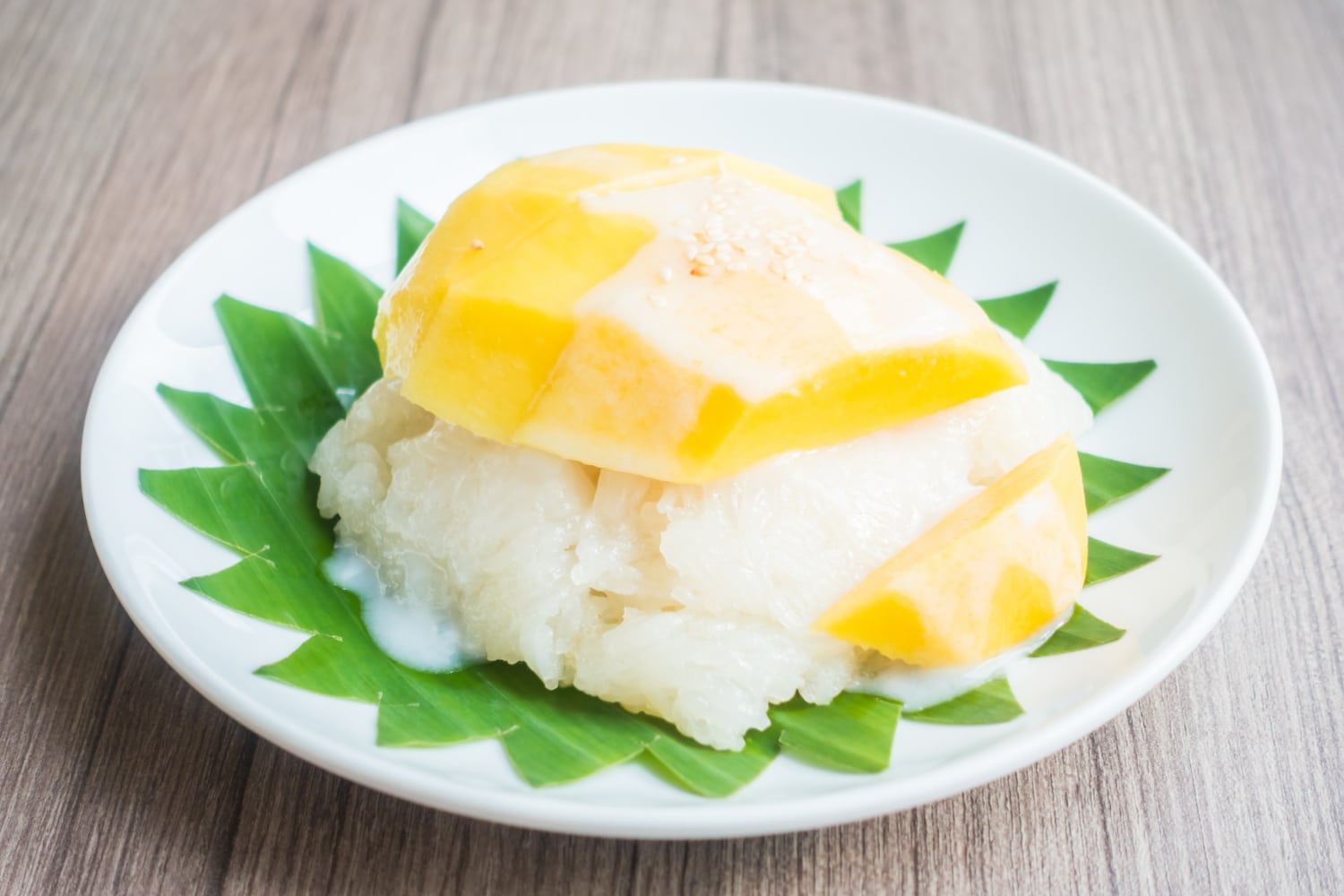 Sticky rice is a staple in many countries in Asia, including the Philippines, Thailand, and Laos. As a staple, sticky rice is consumed in many forms, from sweet, moist rice mango dishes to plain steamed rice cakes topped with coconut and sugar.

Sticky rice dishes and desserts are most prominent in Southeast Asia, and there are both salty and sweet dishes in different cultures. Southeast Asia is also a well-known gastronomical destination for tourists; sticky rice food items are almost included in the gastronomic itinerary.

In places like Laos, sticky rice is present in most meals, as it is tasty, heavy in the gut, and very satisfying as a food item.

Jasmine rice is a cultivar of white rice and is best known for being cultivated in the Kingdom of Thailand. People who have had jasmine rice will say that it is stickier than ordinary Indica rice. Despite the added stickiness of this rice, it cannot be compared (still) to glutinous rice, which is the proper cultivar for making truly sticky rice.

Jasmine rice is also being cultivated in other parts of Asia, from Vietnam to some Philippines. Jasmine rice has a lower level of amylopectin and is three times stickier than the long-grain varieties sold in the US.

Jasmine rice is dominantly marketed as either white rice or brown rice. The trademarked Thai jasmine rice has a very slender appearance and is very aromatic. This type of rice is known as home mali.

Is Basmati Rice A Sticky Rice?

Like jasmine rice, basmati rice tends to cook into very distinct grains, and when steamed and washed correctly, you will see that the grains are also shiny and well-defined, making them perfect for various kinds of recipes and side dishes. But unfortunately, if you are thinking of using basmati rice for sticky rice recipes, that will not work.

Basmati rice refers to long-grained rice cultivars that are commonly grown in Pakistan and India. These two regions produce up to 65% of the total global supply of basmati rice, making them rice powerhouses in their own right.

The name of this rice translates to “full of aroma.” If you have consumed basmati rice before, you would know that it is indeed one of the most aromatic rice types, increasing its value when this rice is served commercially in restaurants. The Indian government has parameters that help identify if a variety of rice is indeed basmati.

Is Sticky Rice and White Rice the Same?

No, sticky rice and white rice are not the same things. While they come from the same plant species (Oryza sativa), it is a distinct variation or cultivar (glutinosa) that makes it very different from the short, medium, and long-grained variations commonly sold in the market.

Glutinous rice is also known by many names, including waxy rice or sweet rice (on top of being the quintessential sticky rice). A few distinct regions produce damp rice crops throughout the year. The top contenders for the production of sticky or waxy rice are the Northeastern region of India, Bhutan, and Laos.

Compared to other Indica rice variants, sticky rice has deficient amylose levels, contributing significantly to its stickiness once cooked. The name of this rice refers to the grains sticking to one another as if there was glue and not because the rice grains have gluten. Gluten occurs naturally in other crops like wheat but never in natural rice.

We must also clarify any confusion regarding sticky Japonica rice and glutinous rice because these two rice variants are not the same. Japonica rice used to make sushi is gummy because it has a higher amount of amylopectin than comparable short-grain variants. Still, this level of stickiness is not enough to make Japonica rice proper glutinous rice.

We’re saying this not to discourage people from cooking different rice variants but because specific rice types are needed for other recipes.

Glutinous rice results from a single mutation that was successfully identified and then isolated by farmers to reproduce very sticky rice. In short, rice wasn’t supposed to be this sticky; it just so happened that farmers were able to capture a batch of rice that turned moist when cooked. Glutinous rice is almost entirely made of amylopectin starch and contains virtually no amylose. This dramatically changes the reaction of the core of the rice to heat and moisture, and the after-effect is sought after by home cooks and other culinary personages.

There are two types of glutinous rice – unmilled and milled. The variant that people see more frequently in Asian supermarkets is the milled variant that is very fluffy and opaque, unlike regular white rice with a certain level of gloss and transparency. If the glutinous rice is unmilled, it will have a purplish or blacking tint because of the bran surrounding the core of the grain.

Be wary of buying cheap glutinous rice (especially the unmilled variants) because there have been reports for years of some criminal organizations using dyes to make it appear that milled glutinous rice is unmilled would fetch a higher price in the market. The lack of proper regulation makes it harder to crack down on the groups responsible for dyeing rice for more profit.

It doesn’t matter if there is bran around the core of the grain or not – both types of glutinous rice can be used for cooking desserts and other sticky rice recipes.

Which Rice Has the Least Carbs